Upside Out, Inside Down

There is a song by The Grateful Dead that uses that line and it always stuck with me as a metaphor for turbulent times.

Upside out, inside down seems very appropriate these days.

I was meeting a friend for breakfast this past Saturday and while we were at the establishment, a guy we both knew from church came in and we asked him if he wanted to join us. As our conversation progressed, we discussed a sad, local situation in our church and he said that he had lost his faith and that any time he saw a priest, in his mind, he would question their integrity and intentions.  A sad commentary.  He then went on and began talking about climate change and how the world was going to end in a few years and it was probably already too late and our children would suffer.

Having my own opinions on “Climate Change”, I inquired where he had gotten that data and he replied that “all scientists agree” and I pointed out that not all scientists agree and that I had read several articles regarding the falsification/modifying of data and making the statistics say what the people paying for the study wanted to hear. (I minored in statistics in college.  Give me the numbers and I can make them say whatever you want). He became irate, cut me off and said scientists would never do that.

My question to him should have been, So, you question the integrity and honesty of every priest you see, but not of every scientist in the world”?  Upside out, inside down.

Shootings,  riots, political lies, political hit jobs, and political protection, but we only hear what the media wants us to hear.  Maybe those black helicopters are buzzing around? Upside out, inside down

I’ve turned off my TV and listen to my Baroque playlist on Spotify for hours on end. It is better for my blood pressure.

A helpful distraction though is my granddaughter. 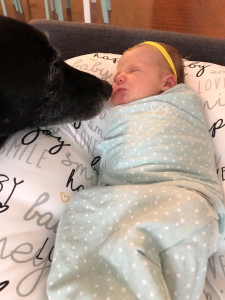 A girl and her dog

I’m concerned about the world she has entered.

Living between Aiken & Nashville, TN, USA, I like to share what I am looking at, thinking about or listening to. I refer to this as the view out my window. Thanks for stopping by.
View all posts by Ray V. →
This entry was posted in Politics and tagged climate change, grandchildren, polictics, political corruption, The Grateful Dead, trust. Bookmark the permalink.

4 Responses to Upside Out, Inside Down