Most of us are creatures of habit. It is inherent to the human condition.

Each evening, just before going to bed, I prepare  the coffee maker for the following morning’s pot of brown, liquid  sunshine. 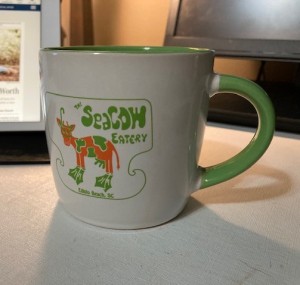 I also add  a few shakes of ground cinnamon  to the pot as I like the added flavor. Aside from that, I drink my coffee  “black”.

Thursday evening I completed  the preparations, but as I left the kitchen, realized that I had overlooked the cinnamon.

With only the nightlight on, I opened the cabinet, grabbed the container, added a few shakes and made my way to bed.

Friday morning comes and my routine kicks in. . .  turn coffee maker on, glass of water with vitamins, glass of orange juice to drink while I start reading the news and stuff on my iPad  and when the OJ is done, the coffee is usually ready.

I poured my first cup, made my way to the table, sat down and took my first sip.  It didn’t taste exactly right, but I as already reading a story about the weather-related impacts  in the South and didn’t pay too much attention.  Maybe it was from not having rinsed off the soap  after washing the cup the day before?

After a second gulp  I consciously realized something was dreadfully wrong. Never doubting myself, I then attributed it to the fresh bag of coffee I had purchased a few days earlier.

Then it hit me… the cinnamon?  Opening the cabinet, there it was . . . a perfectly labeled bottle of Ground Cumin with a bottle of cinnamon a few inches behind it.

You don’t have to take my word for it, but while it is great for seasoning meat for tacos,  I doubt you will ever find Cumin listed as an ingredient for any coffee recipe.

And for good reason.

Note to self:  Going forward, turn lights on and wear glasses when gathering ingredients to ingest. 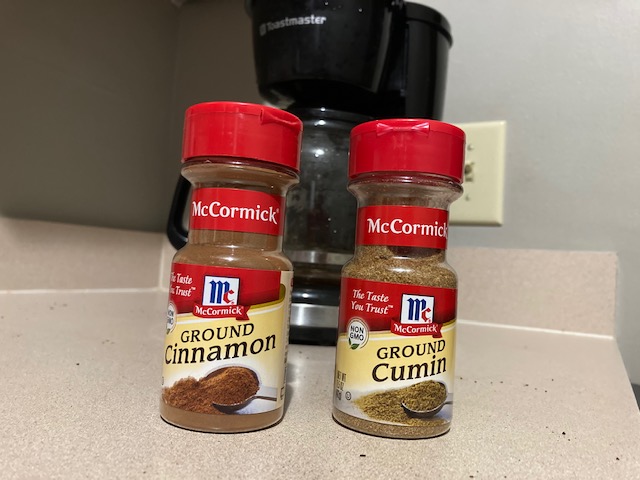 Similar containers. Ingredients, not so much.

Living between Aiken & Charleston,, South Carolina, USA, I like to share what I am looking at, thinking about or listening to. I refer to this as the view out my window. Thanks for stopping by.
View all posts by Ray V. →
This entry was posted in 2021, 25 blogs, aging, coffee and tagged aging, cinnamon, Coffe, cumin, eyesight. Bookmark the permalink.

10 Responses to Routines And Maturing Eyesight