It was the Summer of 1972 and having just a few dollars saved up, I went shopping with my grandparents at the Two Guys Department Store on Rt. 22 in Union, NJ.

At the age of 12, my goal that day was to buy my very first record album with my own money.   I bought two.

I have no recollection of why I bought the two that I did, but it doesn’t matter now. The two albums were Killer, by Alice Cooper and Paranoid, by Black Sabbath. 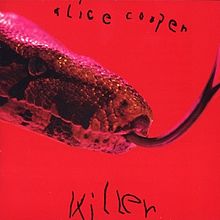 When I got home, my parents were less than impressed by my selections and the consensus was that I had just taken the first step to becoming a satan worshipper. Furthermore,  I was going to return those two albums because they were not appropriate for me, or anyone else for that matter.

Fast forward 48 years and while I now own almost every Alice Cooper Album, I have yet to become a satan worshipper. Cooper, age 72,  is a committed Christian who has been married to the same woman for over 40 years, is a recovering alcoholic since 1977, and was once the number one player on the Pro-Am Golf Tour. His net worth is a little over $40 million dollars and he supports several charities. He is still actively touring as a musician and if I may say so, with the best band line-up he has ever assembled. The band members all take a pledge (sign a contract) of sobriety and spend their spare time playing golf and working out as they tour the world, playing their music.

So, I guess it is safe to say that my parent’s fears were somewhat unfounded.

All that to lead into the real reason why I am writing this, which is my disdain for musicians and actors who use their celebrity as a bully pulpit. Now, there is a difference between writing political songs, as does Tom Paxton and those that feel the need to continually grandstand as the likes of Robert DeNiro, Bruce Springsteen, and Ted Nugent enjoy doing.

One of my blogging buddies, Jim Borden, just last month wrote on the same topic, but from a slightly different perspective, What would cause you to stop being a fan of someone or something?

So, I had to smile this morning when I came across this quote from my old pal, Alice Cooper. It is a  bit of logical sanity from a guy who was written off as insane decades ago.  Interestingly enough, even from the quote, you can’t tell what side of the aisle he sits in.

It’s just one man’s opinion, but a good man at that.

Had the video on from concert in New Zealand back in February on while I wrote this.

Living between Aiken & Charleston,, South Carolina, USA, I like to share what I am looking at, thinking about or listening to. I refer to this as the view out my window. Thanks for stopping by.
View all posts by Ray V. →
This entry was posted in America, music, Music of the 1970's, Music of the 1980's, Politics, Social Commentary and tagged abuse of power, Alice Cooper, Borden's Blather, Bruce Springsteen, opinions, Politics, politics and music, robert deniro, Tom Paxton. Bookmark the permalink.