Get Right With My Soul

A few years ago, I started  writing occasional posts entitled “Take The Backroads”

Callery Pears Blooming on US #1, just around the corner from our home.

Today, I took a ride up through Edgefield County, SC, The Peach Capital of the World, (Edgefield County I am told, produces 300 times the amount of the state of Georgia, the so-called Peach State.) to visit with a father and son who are the epitome of “Country Undertakers” I wish I thought to get a picture of them but did not. Back when I owned my funeral homes, they were a big help to me and it was great to spend an hour catching up.

I was in no rush today and noticed the Callery Pear trees were blooming and then, much to my surprise, I saw that the acres and acres of peach orchards were getting buds and some blooms.  Soon, they will be oceans of pink beauty. Spring must be on the way, but let’s hope a hard freeze doesn’t wreck the peach crop. 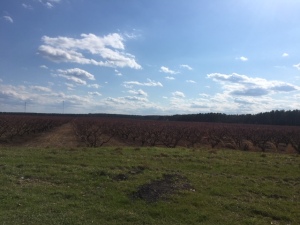 Acres of Peach Orchards. They are difficult to see but buds abound.

When I was younger, I would speed from one place to another, often being less than kind to old men driving.  Finally, I have grown to understand why they were taking their time…

A peach tree, the blooms have started.

Whenever I post these stories, I think about this song that the band I played in covered for a short time.  It is a great story in and of itself.

Living between Aiken & Nashville, TN, USA, I like to share what I am looking at, thinking about or listening to. I refer to this as the view out my window. Thanks for stopping by.
View all posts by Ray V. →
This entry was posted in backroads, Uncategorized and tagged avoid the interstates, rural roads, take the backroads. Bookmark the permalink.

6 Responses to Get Right With My Soul