The Honeymoon Is Over

Once upon a time…

A man wakes up in the hospital, bandaged from head to foot. The doctor comes in and says, ‘Ah, I see you’ve regained consciousness. Now, you probably won’t remember, but you were in a serious wreck on the freeway. You’re going to be okay, you’ll walk again and everything, but something happened. I’m trying to break this gently, but the fact is, your penis was chopped off in the accident and we were unable to find it.’

The man groans, but the doctor goes on, ‘The good news is that you’ve got $9000 in insurance compensation coming and we have the technology now to build you a new penis. It will work as well as your old one did -better in fact! But the thing is, it doesn’t come cheap. It’s $1000 an inch.’
The man perks up at this. ‘So,’ the doctor says, ‘it’s for you to decide how many inches you want. But it’s something you’d better discuss with your wife. I mean, if you had a five-inch one before, and you decide to go for a seven-inch version, she might be a bit put out. But if you had a seven inch one before, and you decide only to invest in a five-inch model this time, she might be disappointed. So it’s important that she plays a role in helping you make the decision.’
The man agrees to talk with his wife.
The doctor comes back the next day. ‘So,’ says the doctor, ‘have you spoken with your wife?’
‘I have,’ says the man.
‘And has she helped you in making the decision?’ 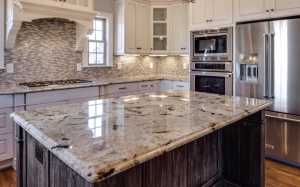 A happy wife = a happy life.

Living between Aiken & Charleston,, South Carolina, USA, I like to share what I am looking at, thinking about or listening to. I refer to this as the view out my window. Thanks for stopping by.
View all posts by Ray V. →
This entry was posted in comedy and tagged comedy, funny stories. Bookmark the permalink.

6 Responses to The Honeymoon Is Over