A Morning Of Memories

Earlier today, I attended the Aiken Department of Public Safety Employee Reunion Breakfast and it appeared that a good time was had by all.

Ryan and me after breakfast.

While I started my adventure as a firefighter/EMT back in 1976, I worked as a firefighter/driver-operator in Aiken from 2000 until April of 2012 when I “retired.” Thirty-six years in emergency services, all while I also had my career in funeral service.

It was great to see so many of the folks I used to work with over the years, both in law enforcement and the fire division. Public Safety provides law enforcement, fire, and first responder services to the City of Aiken and adjoining fire coverage area.   All the police officers are also trained as firefighters, but most of the firefighters are not cross-trained in law enforcement.  That being said, everyone gets along and works as a team.

It has been seven and a half years since I retired and if I said I didn’t miss it every day, I’d be lying. It was fun, it was exciting I helped people and I made friends that will last until the days we die.

Thanks to Chief Baranco and the committee that put this event on.  I already have next year’s date on my calendar. Additional thanks to Capt. Ryan Senn, Columbia, SC Fire Dept., Engine 33, who told me of the event the other evening when I stopped by his firehouse for a cup of coffee. (I forgot to update my address with Aiken when we moved into this house) At the sake of sounding maudlin, I refer to Ryan as the son I never had.  He is as old as our daughter Kelliann and I introduced him to some people at the CFD. He got hired on and now he is captain (officer in charge) of an engine company.  He and his crew are always most gracious when I stop by to visit.

As I get older and physically can’t do many of the things I once did, I am thankful for those I worked with and the clear memories from the days I could. 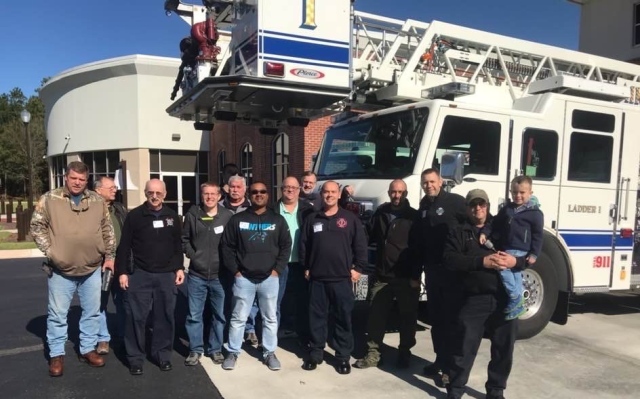 The guys that worked together 10-15 years ago. Some retired, some moved on and some still there.

Living between Aiken & Nashville, TN, USA, I like to share what I am looking at, thinking about or listening to. I refer to this as the view out my window. Thanks for stopping by.
View all posts by Ray V. →
This entry was posted in Aiken Dept of Public Safety, Aiken SC and tagged Aiken Dept of Public Safety, emergency services, old friends, reunions. Bookmark the permalink.

7 Responses to A Morning Of Memories