He Was A Good Dog

He was a good dog.

Earlier today, Kelliann, Megan and I held our Snickers, scratched his back and told him what a good boy he was as he took his last breath. He got sleepy, started snoring as he normally did. . . then he stopped.  As difficult as it was, being there with him was the least we could do for a loyal dog that was part of our family for over fifteen years.  On his last trip to the vet’s, we stopped by Wendy’s for a  cheeseburger and a Frosty. Maggie, his companion for 15 years was there also so she could sniff him and understand that he was dead. If that sounds strange to you, please read this short article: What About Man’s Best Friend?

The last few days have been a bit surreal as I scheduled the appointment with the animal hospital almost a week ago and it was emotional knowing that his time with us was almost done. Without going into details, it was time.

This past weekend, our three daughters and their dogs were here for Mother’s Day. We all acknowledged what was on the horizon and it was “Spoil Snickers Weekend” It was the last family reunion with all the members present.

Our first “rescue,” Snickers was abandoned in Aiken during the Fall 2003 Steeplechase event. He was taken to our veterinarian who tried tracking his owners down, but they denied knowing him.  She knew that Chip, our 12-year old yellow lab had recently died and Maggie, then six months old, was used to being around another dog. She was wondering if we might be interested in this handsome boy.  He was about the same age as Maggie and was scheduled to be neutered the following day.  Dr. Brown invited me to come and visit this young, skinny black Lab.

Upon meeting him, there was no doubt that he’d be coming to live with us.

The consummate gentleman, he and Maggie were together for fifteen years and while he would typically go through the door before her, he would always (yes, always) stop, turn around and wait for her before he would walk off the porch with her. This might be TMI, but he would usually wait to pee until after she did, and would pee on the same spot.  He didn’t do that with the other two, just Maggie.

Our daughter Megan mentioned the other day that she doesn’t ever remember Snickers barking. Everyone agreed.

Snicker’s never lived up to being a retriever. Throw a tennis ball? He could care less.  He loved to go for rides in the car (unlike his younger siblings)  and was always content to occasionally sit at my feet while I smoked an evening cigar on the front porch. He would tolerate the aromatic clouds of Honduran, second-hand smoke and lick my finger after I would dip it in whatever adult beverage I was sipping. Like me, he seemed especially fond of Lagavulin Scotch.

There have been many ups and downs in my life over the last fifteen years and there were times I felt very alone, and deservedly so.  Snickers was unconditional.   He was a good listener and epitomized the “Ministry of Presence.” 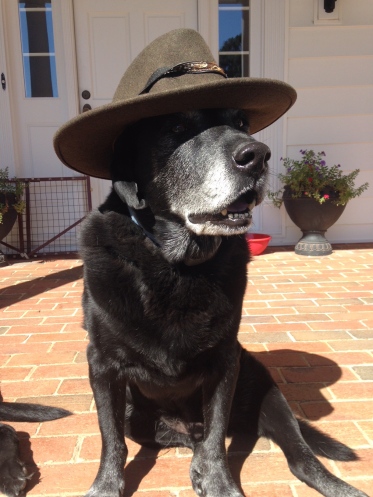 At the old house, approx 3 years ago.

In his prime, he was young, strong and fast and like many of us, he grew to be old, frail and slow.

He was a good dog and when the day is done and the page is turned, that was enough.

Once his ashes are returned, he will take his place on the shelf next to Chip.

Thanks for fifteen, great years buddy.  I’ll miss you and never forget you.

Note:  I began writing this “obituary” a week ago and edited a little bit each day. If I had waited until today to start, it would be unintelligible.

Living between Aiken & Charleston,, South Carolina, USA, I like to share what I am looking at, thinking about or listening to. I refer to this as the view out my window. Thanks for stopping by.
View all posts by Ray V. →
This entry was posted in black labs, Dog photographs, dogs, rescue dogs, Uncategorized and tagged black labs, dealing with the death of a dog, Dogs and death. Bookmark the permalink.

31 Responses to He Was A Good Dog